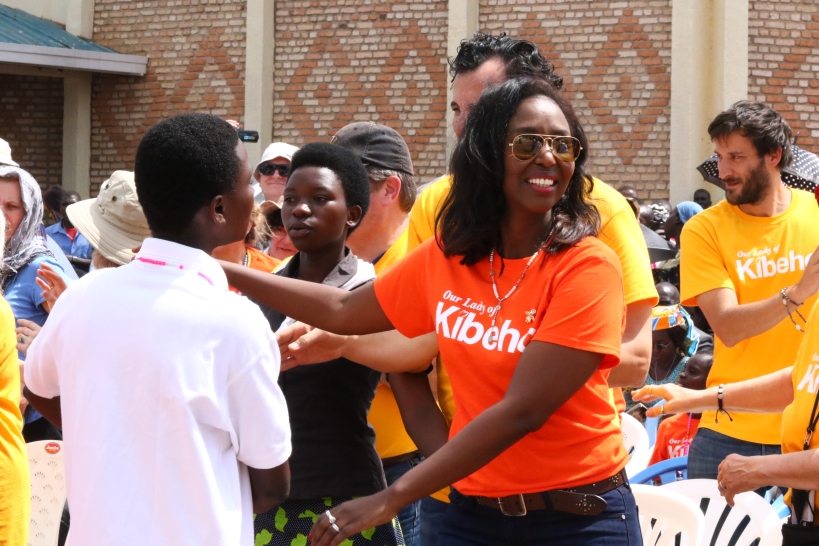 The National Shrine of Our Lady of Kibeho has become a popular place of pilgrimage for both Rwandans and those coming from every corner of the world to hear the story of the Blessed Mother appearing to those three schoolgirls, warning them of the coming devastation and predicting the genocide that would soon cover the land in a river of blood. Immaculée Ilibagiza, herself a survivor of the genocide and a good friend of Father Ubald’s, frequently leads pilgrimages there. You can find more about her schedule here.

While traveling with Fr. Ubald, he told us the true story of a spiritual healing that had recently taken place at the shrine in Kibeho while he was preaching about forgiveness as the way to find peace. When Fr. Ubald challenged those present to forgive those who had harmed them, a man came forward to give testimony. He said he had grown very hard against God and the Church because of how he had suffered during the genocide, having lost so many people who had been dear to him — including his wife.

Years after the genocide, he had remarried a woman who was a devout Catholic, who had prayed for her new husband to find peace. When she heard that Father Ubald was having a retreat for victims of the genocide, she encouraged her husband to attend — but he refused. She did not press the issue, but continued to pray.

The day of the retreat, the man had a change of heart while he was out milking the cow. He called his wife to bring him some water to clean himself up, and told her that he was going to the retreat. They went to the church together, and when it came time for those who had been harmed to stand up and announce their intention to forgive, he announced, “The first person I forgive is Jesus.” He strongly believed that Jesus had turned his back on him back in 1994.

“Some were shocked, even horrified, that the man would say such a thing … ” admitted Father Ubald to me as he relayed the story. “But the next week he was back. He said to me, ‘Now it is I who must beg pardon. I must say I am sorry for keeping this hatred in my heart for so long.'” Like so many others, he had felt betrayed by the very people who should have shown him the love of God. “That is why we need so badly to build the Chapel of God the Father,” said Father Ubald. “The people need to be reminded that we are all children of one heavenly Father — God the Father.”

He took us inside, where the scaffolding still filled the sanctuary, though the workers had stopped building because there was no money to pay them. “I heard God very clearly tell me that this placed needed to be built. I pray every day that he will make a way for this to happen, so that everyone will hear of the God who loves like a good father.”

“I will help you, Father,” I found myself saying. My husband eyed me questioningly. We have two special needs teenagers and an elderly parent living with us, and I am only working half time. “I believe you have been given a mission from God — and I will tell people what I have seen, and pray with you that he will touch the right hearts to respond.”

If you would like to help, please make your donation here. No gift is too small. Each gift is an answered prayer.

Heidi Hess Saxton is Father Ubald’s editor at Ave Maria Press. His book, Forgiveness Makes You Free will be released in April 2019. You can read more of Heidi’s writing on her blog “Life on the Road Less Traveled.”